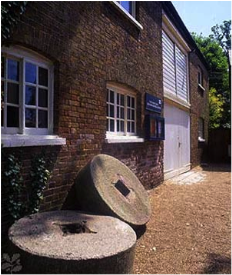 In the middle of the 19th century the Hatfeild family (that’s how the name was spelt) bought much of the local area from the Garth family. Alexander Hatfeild was the first Hatfeild in Morden. He leased snuff mills in Morden Hall Park. He married Elizabeth Gilliat and they used her surname as the first name of their son, who was born in 1826.

Gilliat Hatfeild married Jesse Ellen Davis and on March 1st 1864 their son was born and was named Gilliat Edward Hatfeild.

Hatfeild School was named after Gilliat Edward. He was fond of children and used to open up his land to them. He died on 9th February 1941 and is buried at St. Lawrence’s Church, Morden.

Gilliat Hatfeild and the National Trust 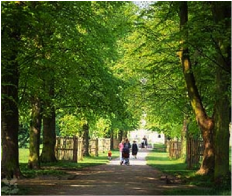 Morden Cottage was home to Gilliat Hatfeild, who considered the cottage better suited to a bachelor than the Hall. He was a keen huntsman and fisherman, attracted to the idea of being a country gentleman. Many of the buildings on the estate reflect his interests, including gatehouses, lodges and a stable block built for his hunting horses, which has a weather vane in the shape of a trout. Even the former Dairy was converted for trout breeding.

The formal garden of the cottage is surrounded by an unusual collection of ornamental trees, including one of the oldest yews in England. Many of the trees in the park were planted in the 19th and 20th Century by the Hatfeild family.

In 1941 Gilliat Hatfeild left the core of the estate (125 acres) to the National Trust.